It was about time for the BMW to get back into the game of the luxurius and sport sedans. At last the very well known 3-series became turbo in it’s gasoline engines in the whole range from the 316i to the M3.

The 3-series starts from the 136hp in the 316i model equipped with the 1.6 liter TwinPower Turbo engine. This engine is the evolution of the Peugeot – BMW Prince engine, is its next generation to be more precise with variable valve lift and some other features so the tunability and power gains are ensured.

We have tuned these turbo engines in some 116i BMW’s here in Greece and around the world but never a 316i.

So a customer called us one day and asked us for a help to gain some power in his 316i because the factory 136hp and 220Nm of torque was not enough for his 1400+kg car.

We met after 3 days and as soon as he came to us we took out the ecu to check if we were able to tune it because every 1-2 months the software versions and even the ecu versions change due to anti-tuning regulations that all automotive companies have.

And yes, we did it. We were able to read the ecu successfully so it took us about an hour to realize what we have to tune to get the extra power from this engine. And from the first file, Booom!!! +80hp and 90Nm of torque on 98ron pump gas.

The customer told us that this gain was more than fine so our job ended with just one file, within an hour. 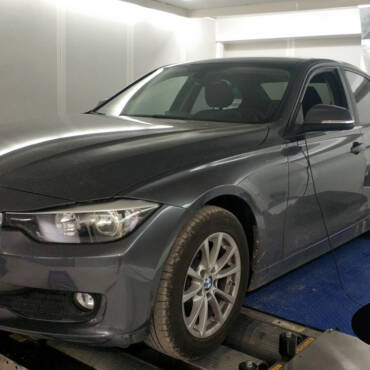